Mr Hammond originally planted these in 1916 as a hedge of 13 plants at the Western boundary of what is now the Chinese & Japanese garden.  One of the bushes was first planted in the N. Walk and then transplanted here in 1919. By 1993 only 3 plants remained these have been numbered individually: #046, #047 and #048. In 2019 3 new specimens were added.

In most years the fruit are seen in the Autumn around the base of #046 in profusion. We assume this is the female tree and the other two are males. The fruit are not edible.

Introduced to Britain in 1818, Osage Orange originated in a small area of Red River drainage in Texas, Oklahoma and Arkansas.  Now widely naturalised in all contiguous States of the USA, it is also cultivated in Italy, Romania, Russia and India. A member of the Mulberry family, this deciduous tree has a very dense, hard, bright yellow, heartwood which, while being strong and flexible, is also extremely resistant to rot. In the past it was used to make yellow dye, and an ingredient in the tanning trade.  Now, in the USA  it is widely used as fence posts or construction in damp situations, however, it needs be worked green in order to accept nails or staples; once dried, it becomes twice as hard as White Oak (Quercus alba).   The heavy close grained wood is much prized for tool handles and was traditionally used by Native Americans (Comanche tribes) to make their bows; however the dust created while working can be a skin irritant. The dried wood burns hotter, and longer, than many other woods. 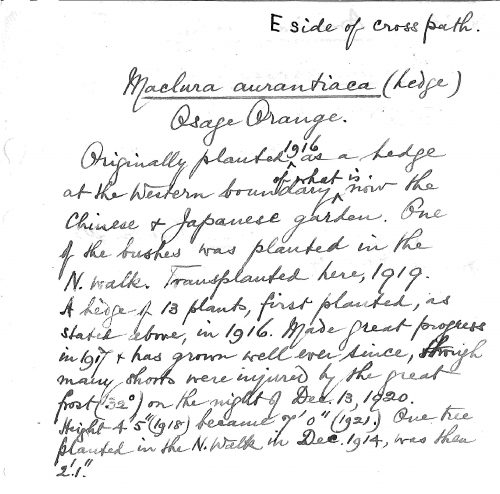