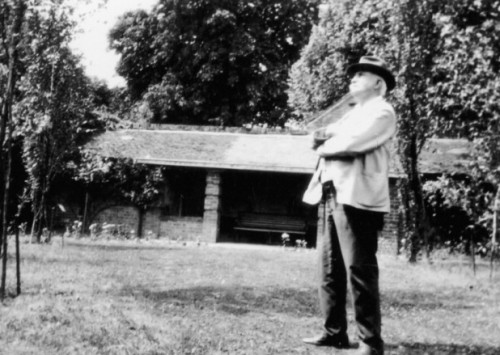 Francis Hammond pictured in his arboretum

George and Christina Marshall have produced the book to mark 100 years since Francis Hammond – then headmaster of Market Harborough Grammar School – planted the first trees on a 2.4 acre plot behind his home next to the school in Burnmill Road.

The book – ‘Francis Hammond’s Arboretum: 100 Years a Hidden Gem’ – pulls together information from an extensive archive to tell the story of the arboretum, from its creation to its decline and eventual restoration.

Archive photographs – a selection of which are featured here – and recollections from people who have visited the arboretum over the years add to the colour of the book.

Mr Hammond’s intention had been to develop a collection of trees that were new or relatively unknown in Britain and in that he proved successful, planting species from Mexico, Chile, China and Japan.

But by the late 1980s the arboretum was substantially overgrown. Dutch elm disease had wiped out all of its elm trees in the 1970s and hurricane winds in 1987 damaged many other species and features.

A restoration project was launched in 1992 by Mr Marshall, who was then the deputy head of science, and a working party was formed to help realise the project.

Among the party was  Gilli Claycomb, who mapped the entire arboretum and whose extensive work contributed greatly to the the new book.

Over the next 20 years a great deal of hard work went into restoring the arboretum, with new paths installed and trees planted.

Today it can be enjoyed by the public on regular open events, the most recent of which earlier this month attracted a record number of visitors.

The book, priced £5, is available during open afternoon events held on the third Thursday of each month from 2pm to 4pm.

The book is not on general sale at the academy.

The group is always willing to recruit new volunteers and can also arrange tours and visits from local groups.